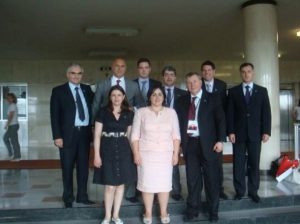 MARRI Network for cooperation of Coordinators for fight against Trafficking in Human Beings (THB) was established on 8 June 2011 in Belgrade. The initial meeting was organized on the margins of international conference “Street Involved Children – Our Responsibility”, organized on 7-8 June 2011 by Save the Children, IOM, MARRI and other partners.  Two main outputs characterized the meeting – agreeing Prevention to be one of the fields of regional THB cooperation; and proposals regarding the legal base for work within the Network.

On 10-11 November 2011, the Second meeting took place in Skopje. The meeting was marked by:

The Third meeting, held on 12 April 2012 in Sarajevo resulted in:

During the Fourth meeting in October 2012 in Belgrade, the Coordinators for THB agreed on:

The Study visit of THB Coordinators to USA was organized in the framework of VolVis Project, on 16 -27 November 2014.  The Coordinators were presented with:

On 15–17 December 2017, THB Workshop was organized by MARRI and RACVIAC in Ohrid. The main outputs of the workshop were:

The Fifth meeting of the Coordinators was organized on 27 February 2017 in Belgrade, in the framework of “SAFERR Women and Girls (Shelter and Access to Empowerment and Risk Reduction” Project, funded by UK Department for International Development (DFID). The THB Coordinators of MARRI Participants, Bulgaria and Greece updated on the past and ongoing activities as well as outlined the further steps and activities as presented in the Conclusions of the meeting:

Starting from September 2019, the Network of the THB Coordinators acts as Steering group of the project Preventing and Combating Trafficking in Human Beings in the Western Balkans (PaCT), where are planned bi-annual meetings of the network for the whole implementation period (until end of 2022).

The first meeting as Steering group was held on 27 November 2019 in Podgorica. THB Coordinators agreed that evaluation of processes for developing THB strategies and updating the Guidelines in line with the GRETA and US recommendations, will strongly support their administrations in developing new strategies in the EU framework.

The second meeting of the Steering group was held online, through the Microsoft Teams platform on 11 June 2020. The Coordinators discussed not only the project progress, but also the newest challenges that they were facing in the daily work, caused by the COVID-19. At the meeting, the participants welcomed the MARRI – GIZ support for evaluation of MARRI Participants’ THB Strategies (as agreed on the previous meeting) as well as the assistance in response of COVID-19 challenges, provided to the THB Coordinators’ Offices in all MARRI Participants, in line with the recommendations of the World Health Organization.

On 24 November 2020, MARRI Participants’ Coordinators for trafficking in human beings met for the third time as members of PaCT Steering Group to discuss the project progress, outcomes and the way forward regarding the project objectives. The meeting was attended by representatives of the project’s implementing partners International Centre for Migration Policy Development (ICMPD), NGO Tjeter Vizion from Albania, NGO World Vision from Bosnia and Herzegovina and the NGO Executive Group form Serbia; representatives of GIZ Project team and the MARRI RC team.

The discussions of the fourth session of the PaCT Steering Group focused on developing approaches for enhancing the functionality of the National Referral Mechanisms (NRMs) as well as implementation of mental health and psycho-social support (MHPSS) measures in the reception centers and shelters for victims of trafficking in human beings.

On 27 May 2021 the PaCT Steering Group met for the fourth time on Zoom. The discussions of this session focused on developing approaches for enhancing the functionality of the National Referral Mechanisms (NRMs) as well as implementation of mental health and psycho-social support (MHPSS) measures in the reception centers and shelters for victims of trafficking in human beings. They were based on the key findings of a research and expert assessments on above-mentioned topics, presented by GIZ Project team. The Steering Group contemplated the way forward and agreed on the proposed activities.

5th Steering Group Meeting of the PaCT Project took place on 17 November 2021 via Zoom. MARRI Participants’ Anti-trafficking Coordinators, the PaCT project partners and an expert from GRETA briefed about the project progress and main achievements but also, discussed the global trends in the trafficking in human beings and their implications in the Western Balkans region.