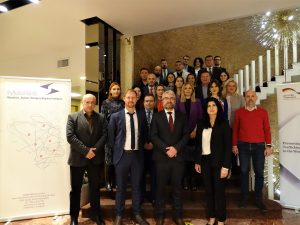 Tirana – The 7th PaCT Steering Group Meeting (SGM) provided an opportunity for the MARRI Anti-trafficking Coordinators, PaCT project partners and experts to discuss the project’s most recent activities, challenges and results as well as to exchange information on the latest developments about trafficking in humans in the region.

The event was opened by MARRI RC Director Sashko Kocev and the Coordinator for Trafficking in Human Beings of Albania Silvana Banushi, followed by the welcoming remarks by PaCT Project Leader Martin Hiebsch.

Giving an overview of the project’s activities since the last SGM, Hiebsch briefed that the awareness raising campaigns developed within the project continued to be present on social networks. He informed that several workshops and trainings have been organised for governmental institutions and NGOs on topics of cyber trafficking, sexual exploitation, migrants at risk of trafficking, and labour exploitation adding to the over 100 different products that have been developed by partner NGOs with the input from governmental institutions, media and victims‘ associations. Regional exchange meetings have been held on the topics of sexual exploitation of women and girls, and cyber trafficking.

The Anti-trafficking Coordinators took positive note of the project’s accomplishments and encouraged the further efforts. After being presented with the actions undertaken in the project’s activity packages, they assessed of the use and usefulness of the Awareness Raising toolkit; the implementation of different Mental Health and Psychosocial Support (MHPSS) measures in the Reception Centres and Shelters; discussed the new approaches in MARRI Participants’ Referral Mechanisms (NRMs); and evaluated Capacity Development (CD) for Identification measures and operability of the Mobile Identification Teams (MITs). Further, they exchanged views on the recent trends and challenges regarding labour exploitation and cyber trafficking recognising that higher level of regional cooperation is crucial for effective prevention and combatting of the crime.

The PaCT Steering Group Meetings are an integral part of the regional project “Preventing and Combatting Trafficking in Human Beings in the Western Balkans (PaCT)” financed by the German Federal Ministry for Economic Cooperation and Development (BMZ) and implemented by the Deutsche Gesellschaft für Internationale Zusammenarbeit (GIZ) and MARRI as a strategic partner.