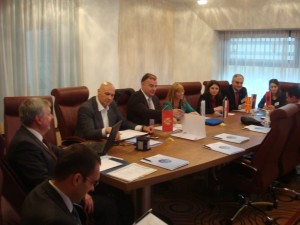 18 April 2012, Sarajevo, Bosnia and Herzegovina – The Third Meeting of MARRI Network for Cooperation of National Anti-trafficking Coordinators took place on 17 April 2012 in Sarajevo. National coordinators from B&H, Macedonia, Montenegro and Serbia were present, as well as representatives from Albania and Croatia. The meeting was organized in the frame of the Workshop on Combating trafficking in human beings financed by TAIEX. The main outputs of the meeting were the conclusions regarding support and future steps in promoting new regional project in the area of THB and upcoming activities of the Network presented by MARRI Regional Centre.

Third meeting of the MARRI Network for THB in Sarajevo