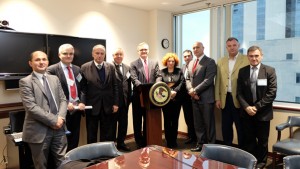 In close cooperation with US Embassy in Skopje, Macedonia, MARRI Regional Centre developed VolVis Project in the framework of MARRI Network for Cooperation in Combating Traficking in Human Beings. VolVis Project started with study visit to USA of all members of the Network – National Coordinators in THB in the WB Region, including a representative from Kosovo*.

The study visit named “Building a Regional Response to Human Trafficking” was organized in the period 16-27 November 2014, as a sub-regional project for Europe within IVLProgram supported by US Department of State. During the visit, members of the Network had unique opportunity to examine US mechanisms to combat all forms of forced labor and sex traficking, introduce US policy initiatives to protect and reintegrate victims of trafficking.

In Washington D.C, during numerous meetings with officials from Department of State (J/TIP, Departments of Justice, Labor, Health, Homeland Security, Bureau of European and Eurasian Affairs, OVC, HSTC) and George Washington University, delegation was introduced to anti-trafficking legislation in the United States, US’s global engagement on the fight against human trafficking and acheivements in integration of government’s and other stakeholders to adress separate but related issues of alien smuggling, frafficking in human beings and criminal support of clandestine terrorist level. Also, the delegation learned US mechanisms of bringing together federal agencies, representatives from the policy, low enforcement, intelligence and diplomatic areas in fighting human trafficking.

Last destination of the study visit was Buffalo, New York. The sity’s position as a border state adds to the heightened need for strong security on against human trafficking. Program was based on visits to faith-based, non profit organizations on the local and state levels, but also with FBI Field Office and US Attorney’s Office.

Within Organized Crime Division there was a Victim/Withess Assistance Program for victims of federal crimes. It was chance to learn how their Office adresses the issue of border cities and forms of illegal trade and trafficking.

In the Buffalo delegation enjoyed traditional home hospitality organized by our host, as well as a visit to Niagara Falls.

The study visit as the beggining of the VolVis Project was great opportunity for MARRI Network to explore US coordination efforts and partnerships among government agencies, NGOs, bussiness and academic community to combat human trafficking. In further steps established contacts will help to develop common projects and activities which would lead to developing better regional response to human trafficking.