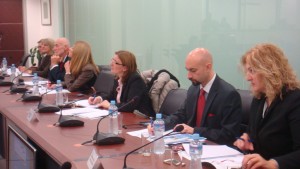 On 4 December 2014, in Skopje, the Macedonian Chairmanship-in-Office of MARRI held the MARRI Regional Committee Meeting. The meeting was held at the premises of the Ministry of Foreign Affairs of Macedonia.
This Committee Meeting was attended by the MARRI National Coordinators or Members of the MARRI Regional Committee from Albania, Bosnia and Herzegovina, Croatia, Macedonia, Montenegro. Serbia was represented by the Ambassador of Serbia to Macedonia.
Also Kosovo* was invited by the Macedonian Chairmanship-in-Office to participate at this Meeting and was represented by the Ambassador of Kosovo to Macedonia,.
The Meeting was welcomed by Ms. Elena Kuzmanovska, State Secretary of the Ministry of Foreign Affairs of the Republic of Macedonia and was chaired by the Ambassador Jon Ivanovski, MARRI National Coordinator of Macedonia, and Trpe Stojanovski, Director of the MARRI Regional Centre.
The issues addressed at the Meeting included the MARRI legal and organizational issues, MARRI Regional Projects, implementation of the Cavtat Declaration, the procedure for election of the MARRI RC Director as well as financial issues.