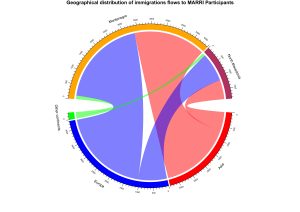 On the first session of MARRI Permanent Working Group on Migration Statistics (PWG MS) since its kick-off on 23 – 24 November 2021 in Belgrade, the members of the Working Group recapitulated the progress made so far and discussed the steps forward in fulfilling its mandate given by MARRI Regional Forum.

MARRI RC Director Sashko Kocev as Chairman of the Permanent Working Group on Migration Statistics, expressed satisfaction that although the primary focus in the reported period has been solidifying and operationalizing the PWG MS, with the strong support of its members, MARRI RC has received the first sets of indicators from two MARRI Participants. In addition, MARRI RC prepared an algorithm (script in R programming language) for processing received data for the purpose of analyses and visualization. The initial analysis of the data indicated excellent prospects for the WB-MIDEX platform, stressed Director Kocev. Even though the process of aligning the statistical data with EU standards will require more patience and work, the benefit of implementing these changes will be immense.

The Report of the implemented activities of the PWG MS was presented by MARRI RC Migration Data and Policy Analyst Jordan Simonov while each MARRI Participant’s delegation gave a brief presentation on the experiences and challenges during the first reporting period, followed by discussions.

At the end, the members of the Group were introduced to the online Satisfaction Survey Form, prepared by MARRI RC to oblige with the Conclusions and Recommendations of 1 July 2021 in which the MARRI Committee instructed the Chairman of the PWG MS to regularly evaluate and report the Participants Administrations’ satisfaction with the WB-MIDEX platform.  The form is available in English and the MARRI local languages.

To reiterate, the MARRI Permanent Working Group on Migration Statistics is composed of migration data experts from MARRI Participants’ Statistical Agencies and Ministries of Interior/Security, established to implement the tasks assigned to it by MARRI Regional Forum of Ministers, regarding statistical methodologies, formats, quality, quantity and periodicity for collecting, processing and disseminating of relevant migration data through WB-MIDEX, as well as to guide MARRI’s work related to migration statistics. The Regional Platform for Non-Personal Migration Data Exchange (WB – MIDEX) enables the exchange of statistics among the MARRI Participants in pre-defined templates in line with EU standards, and when populated, official regular statistics on migration from the Western Balkans will be available publicly. MARRI hosts and administers WB-MIDEX, and will publish data as reported by authorities when they are sent to us in the prescribed quantity and quality.