The online meeting of the MARRI Leg 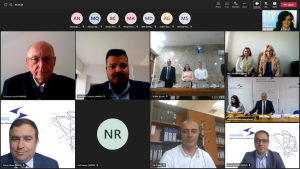 al Framework Reform (LFR) Working Group (WG) was organised as a follow up on the session held on 22-24 March 2022 in Dojran, where the WG worked on the optimisation of the MARRI’s three main documents, i.e. MARRI Statute, MARRI RC General Rules and MARRI RC Financial Rules and Regulations.

In respectful and constructive negotiations, the MARRI Delegations successfully addressed some of the remaining open questions in the draft documents, acknowledging that they may be later altered due to agreements among the Participants at higher political level.

The meeting was concluded with WG’s recommendation to the MARRI Committee to take positive notice of the latest draft texts of the three main documents as agreed on at WG level, to clarify remaining questions and to take all steps which deemed appropriate.