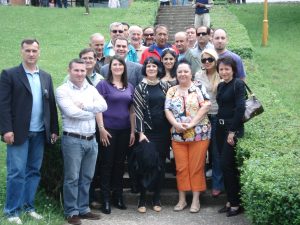 The first meeting of the Heads of the Asylum Departments of MARRI Participants in organization of MARRI RC, took place on 25 May 2005 in Skopje.  During the meeting, the participants recognized the need for establishment of a mechanism for gathering and exchange of information and agreed on methods, frequency and structure of information to be shared, as a precondition for further action in order to:

The Study Visit/Workshop “Best practices in managing reception/detention centers for asylum seekers” was organized in June 2009 in Land of Brandenburg, Germany. As a conclusion, the participants identified the need of development of network for cooperation in the field of reception of asylum seekers, realized through regular annual meetings where Heads of Reception Centers for Asylum Seekers and MOI Asylum Units exchanged opinions, good practices, identified gaps and possible solutions in order to step up capacities and efficiency of national reception systems.

On 17- 19 November 2009, the Launching Meeting/Workshop of the MARRI Member States’ Heads of Reception Centres for Asylum Seekers and MOI Asylum Units on topic “Best practices in reception asylum seekers by family and gender categories,” was organized by the Reception Centre for Asylum Seekers of the Republic of Macedonia, in partnership with MARRI Regional Centre, in Skopje and Ohrid, Macedonia. The Launching Meeting/Workshop was a follow up activity of the Study Visit/Workshop “Best practices in managing reception/detention centers for asylum seekers” held in June 2009 in Land of Brandenburg, Germany. Accordingly, the objective of the Launching Meeting/Workshop was to commence establishment of network for cooperation among Heads of Reception Centers for Asylum Seekers and MOI Asylum Units in the format of Directorium as well as to exchange the best practices, identify gaps and possible solutions for reception asylum seekers by family and gender categories (male, female, unaccompanied minors, etc.).

On 23-24 June 2010, the Commissariat for Refugees of the Republic of Serbia in partnership with MARRI Regional Centre organized the Meeting of the Network for cooperation among MARRI Member States’ national institutions in the field of Asylum on topic “Challenges in 2010” which took place on Zlatibor and Banja Koviljaca, Republic of Serbia.

This meeting was realized through two groups of activities:

The objectives of the event were:

The Fifth Meeting of the MARRI Asylum Network took place on 23 November 2011 in Podgorica. MARRI Regional Centre, under the Presidency-in-Office of the Republic of Serbia organized the meeting, kindly supported by the Ministry of Interior and Bureau of the Care of Refugees of Montenegro. The Meeting was a follow up of the activities from the previous Meetings of MARRI Asylum Network for cooperation among MARRI Member States` national institutions in the field of Asylum held in Branderburg, Ohrid, Zlatibor and Tirana.

Accordingly, the first objective of the meeting was to discuss the next steps regarding the Memorandum of Understanding among Member States of MARRI on Exchange and Provision of Data concerning Asylum Seekers. Second, to present the state of play on the national level in Asylum Issues and to explore modalities for cooperation and strengthening the Network.

The meeting which was organized by MARRI RC, reflected one of the priorities of the Albanian Presidency-in-Office – boosting regional cooperation in the area of asylum. The main topic of discussion was operationalisation of the “Protocol on the Use of Joint Interpretation Pool in the Area of Migration and Asylum” which was signed by all six MARRI Participants. The organization of the meeting was supported by International Organisation for Migration (IOM) under the above mentioned regional IPA II project.

The Regional Conference “Enhanced collaboration within Western Balkans in providing international protection and respecting the human rights of refugees” was organized by MARRI RC with support of UNHCR Skopje on 29 – 31 October 2019, in Ohrid. The working sessions of the conference focused on analysing the current state of play with regards to the asylum procedures and border management in the MARRI Participants, and in particular, the registration and profiling of migrants and asylum seekers by the first contact officers; harmonisation of the Participants’ legislation with Asylum Procedure Directive 2013/32/EU and Reception Directive 2013/33/EU (Procedures, Guarantees and Alternatives to Detention); new developments related to migration movements & modi operandi for irregular border crossings in the region as well as the intergovernmental cooperation and best practices in the area of Integrated Border Management.

On 24 March 2021, the first online Meeting of the MARRI Heads of Asylum Departments Network took place via Zoom. The main topic on the Agenda was the EASO-MARRI pilot work-plan concerning an establishment of a regional hub for asylum trainings (a sub-activity of the IPA II regional project), to be facilitated by MARRI RC under the EASO’s expertise. In this regard, the two attending EASO representatives, the Project Coordinator at the Third Country Support Sector Beatriz Prieto and the EASO Researcher and Trainer Stefano Torelli provided a comprehensive overview of the evolving process, concluding with the next steps towards a sustainable solution.