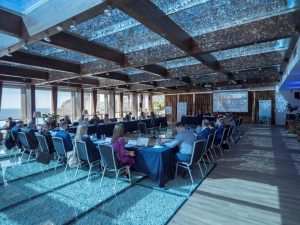 Budva – In line with the priorities of North Macedonia Presidency-in-Office, MARRI RC with support of Hilfswerk International organised a back-to-back meeting for representatives of various migration management institutions in the MARRI Participants, to discuss topics of common interest. Representatives of European agencies and international organisations also attended the meeting.

The event was opened by the Acting Director General for European Affairs, International Cooperation and Support Programs at the Ministry of the Interior of Montenegro, Sergej Mucalica. “The challenges of migration, asylum and displaced persons, given the global security situation, will certainly not be less relevant in the time to come” said Mr. Mucalica, adding that Montenegro was ready to make every effort to contribute to the creation of strong relations in the region with regard to this field of action. In that sense, the regional initiatives including MARRI, for more than a decade present an opportunity to strengthen the regional ties and common values ​​on the road to the European Union. “Migration is a global phenomenon, and the success of the national response largely depends on regional and international cooperation. Aware of our limitations, we greatly appreciate the support provided by international partners present here – the European Commission, the European Union Agency for Asylum (EUAA), the European Border and Coast Guard Agency (Frontex), the International Organization for Migration (IOM), the United Nations High Commissioner for Refugees (UNHCR) and the Joint Platform for Coordination (JCP), which I am convinced will not be absent in the period ahead. Therefore, I appreciate that this gathering is a great opportunity to identify regional challenges and define answers to them through joint dialogue” – concluded Mr. Mucalica.

In his welcoming remarks and in context of the meeting at hand, MARRI RC Director Sashko Kocev stressed the importance of having at one table representatives from the asylum offices, reception facilities for asylum seekers and foreigners, officials who have first contact with migrants as well as other migration authorities from the region, pointing out that “without good coordination between these services, the process will be significantly slowed down and much more complicated”. He added that the area of ​​asylum was a very sensitive issue that goes hand in hand with protection of the basic human rights, and working in this area requires excessive and comprehensive knowledge in many areas. “When you work with asylum seekers you actually work with human destinies, you work with all kinds of vulnerable categories of people, so in many cases you are not just enforcing laws and bylaws but you are also using your experience and immediate instinct in order to make the best decision” said Mr. Kocev. He used the opportunity to thank Hilfswerk International for their continues support.

On behalf of Hilswerk International, the audience was greeted by the Regional Director Balkans, Suzana Jasharevic who expressed readiness to continue the fruitful cooperation with MARRI.

In the course of the two and half days and nine thematic sessions, the attendees of the meeting presented the current state of play and discussed the influence of the newest migration trends. The engaging discussions focused on implementation of the asylum procedures, challenges of dealing with vulnerable categories, the capacities to deal with possible mass migration flows, procedures of registration of migrants and existing systems for reception of asylum seekers in the MARRI Participants. The cooperation between the competent migration authorities  including the challenges and possible solutions were also touched upon while the interventions by the international partners further enriched the discussions.

This event was supported by the Austrian NGO Hilfswerk International – one of the implementers of a project financed by the Asylum, Migration and Integration Fund (AMIF) through the Austrian Federal Ministry of Interior (BMI).