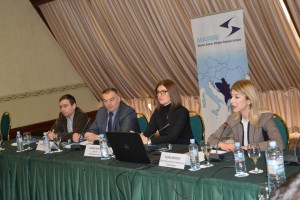 MARRI Regional Centre organized Fourth Annual Meeting within the framework of the BORDAIRPOL II Project funded by the Swiss State Secretariat for Migration. The meeting took place on 7 February 2018 in Skopje, Republic of Macedonia.

Head of the Border Police, Marinko Kocovski, opened the meeting on behalf of the Ministry of Interior of the Republic of Macedonia.

The second objective was to receive inputs for the eventual follow-up of the Project by its participants through interactive group work and discussions. Constructive work resulted in several conclusions that represent the basis for the new Project cycle and strengthening of regional cooperation in the area of border management.

Conclusions of the meeting can be found here.

The representatives of international partners from SEM, FRONTEX, INTERPOL, ICMPD, and IOM participated and contributed to successful implementation of this project activity.

BORDAIRPOL II – IV Annual Meeting for the Heads of Border Police, Commanders of international airports and Heads of the Land Border