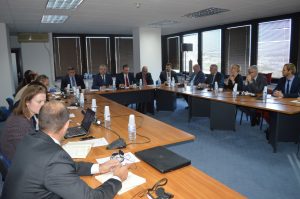 Skopje – MARRI RC with the support of German International Cooperation (GIZ) organized a consultative workshop where representatives of MARRI Participants, GIZ, experts for trafficking in human beings and MARRI RC team worked together on preparation of a new regional project on Preventing and Combating Trafficking in Human Beings and Migrant Smuggling. The project that is due to start mid-2019, will be supported by German Federal Ministry of Economic Cooperation and Development (BMZ) and implemented by GIZ in partnership with MARRI.

In their opening remarks, MARRI RC Director Sashko Kocev and GIZ Country Director for Macedonia and Kosovo* David Oberhuber welcomed the further cooperation between MARRI and GIZ, emphasizing the importance of MARRI role in the implementation of the project activities and the overall value of MARRI-GIZ strategic partnership.

During the regional consultation, the THB Expert Mathias Steinebach presented the findings from the earlier conducted fact-finding mission in the Western Balkans after which the MARRI Participants presented the challenges they are facing regarding the organizational structures of the institutions in charge of combating of trafficking in human beings and the procedures in force. The following dissuasion focused on identifying the potential fields of intervention in the framework of this project on national and regional level, according to the needs of the Participants.

* This designation is without prejudice to positions on status, and is in line with UNSC 1244 and the ICJ Opinion on the Kosovo declaration of independence