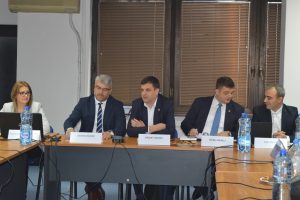 Skopje – The regular mid-term MARRI Regional Committee meeting under the Presidency-in-Office of Kosovo* was held at the premises of the Regional Centre in Skopje and it was attended by MARRI Committee Members, MARRI Coordinators, representatives of MARRI Participants and MARRI RC staff.

As per usual practice, MARRI RC Director Sashko Kocev reported on Centre’s operations and impact in the period of June-December 2019 including the implemented and upcoming project activities, events linked to the cooperation with existing and potential partners, and the progress of MARRI Legal Framework Reform process. Additionally, the Director briefed about the human capacities of the Regional Centre and the nominated representation in MARRI bodies.

In line with its competences, the Committee discussed the MARRI Financial Plan for 2020 and agreed on the future steps regarding the development of the MARRI Strategy for the forthcoming period. The Committee also took notice of the proposed amendments to the “Protocol on the Use of the Joint Interpretation Pool in the Area of Migration and Asylum” and draft Memorandum of Understanding with Balkan Refugee and Migration Council (BRMC), presented by IOM Project Assistant Milica Trpevska and MARRI Programme Manager Aleksandar Todosiev, respectfully.