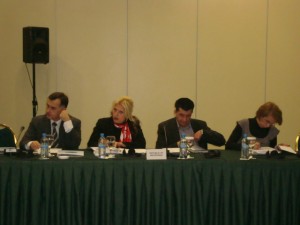 On 17-18 December 2013, in Skopje, Republic of Macedonia, MARRI Regional Centre hosted the round table on the topic “Prevention of Irregular Migration in the Region and Voluntary Return of Irregular Migrants”. The round table was organized in the framework of the Project between the Swiss Government and Bosnia and Herzegovina’s Ministry of Security/Services for Foreigners.

Specific objectives of the round table were:

1. understanding the national and institutional framework for the fight against illegal migration (National Strategy);

2.  strengthening regional and international cooperation to prevent and detect illegal migration in the Western Balkans;

3. cooperation with the countries of origin of illegal migrants (determining the persons’ identity, organizing return to their country of origin);

4. considering the possibility for the countries of the region for joint action in the process of readmission and exchange of data;

5. practical aspects of the implementation of readmission agreements, direct and indirect evidence in determining readmission obligations.

High level government officials responsible for initiation, conclusion and implementation of readmission agreements from Albania, Bosnia and Herzegovina, Macedonia, Montenegro, Serbia and Kosovo* (UN 1244), took part at the round table.

Representatives from Embassies of Switzerland in B&H and in Kosovo, Swiss Federal Office for Migration and FRONTEX also took part at the round table and shared  their experience from CH/EU perspective.

*This designation is without prejudice to positions on status, and is in line with UNSCR 1244 and the ICJ Opinion on the Kosovo Declaration of Independence