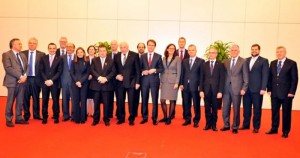 Budva, 19-20th December, 2013 – On 19-20th December, 2013 in Budva the EU – Western Balkans Ministerial Forum on Justice and Home Affairs was held. The Lithuanian EU Presidency, the Commissioner Ms. Malstrom, the Ministries of Interior and Justice from Western Balkan countries and the International organizations were present, discussing the Post – Visa liberalization monitoring mechanisms and visa liberalization monitoring, Counterterrorism and Security: illegal trafficking in firearms and foreign fighters, Secondary movement of irregular migrants from Greece/Bulgaria to other MS via the Western Balkans, Enhancing cooperation on drugs and renewing the commitments of the EU-Western Balkans Action Plan on Drugs (2009-2013).

MARRI RC Director, Dr. Trpe Stojanovski made intervention under the topic  Secondary movement of irregular migrants from Greece/Bulgaria to other MS via the Western Balkans, underlining the Strategical priority of MARRI – regional network of the experts, but also the importance of the regional cooperation and partnership with the neighboring EU countries and other parties. He emphasized the importance of the project implementation and its positive outcome in prevention of abusing the post visa liberalization. Dr. Stojanovski concluded that MARRI RC is ready to take more active role in further work with EU, especially in the projects oriented to support the networking of the experts, promoting the ownership and confidence between the services, sharing the information with purpose to prevent abusing the asylum in the MARRI MS.