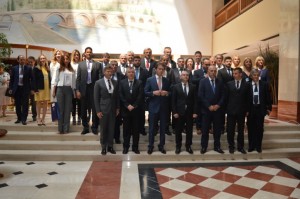 MARRI Regional Committee Meeting and Regional Forum held in Skopje, Macedonia
New Director of MARRI was appointed
Kosovo* admitted to full participation to MARRI RC
MARRI Regional Committee Meeting and Regional Forum organized under Macedonian Presidency- in-Office were held on 09th and 10th of June, 2015 in Skopje.
The Committee Meeting was held on 9th of June that gathered MARRI Committee members who have discussed amendments to the MARRI Statute and Guidelines and Rules of procedure as well as the Audit Report for 2014 and current financial situation in MARRI RC&MARRI budget for 2015.
The Committee members have also discussed proposed Skopje Declaration that was approved. Macedonia expressed satisfaction over the results achieved during the MARRI Presidency-in-Office, underlining the importance to continue intensive regional cooperation in the field of migration making full use of the existing funding opportunities such as IPA II and calling for an increased cooperation and assistance to the MARRI region being confronted with similar challenges as frontline members of the EU.
Also, special thanks to the outgoing MARRI Director, Ph.D. Trpe Stojanovski was expressed, for the integrity with which he had managed MARRI, thus contributing to its successful transformation in a relevant regional organization in the field of migration.
At the meeting the priorities of the Montenegrin Presidency- in-Office were presented.  The Montenegrin Presidency-in-Office will continue the activities in accordance with the 2014-2016 Strategy adopted in June 2014, and in that context will continue the efforts toward achieving a strong regional cooperation of common interest for all the Western Balkan countries in the following areas: migration (legal migration and irregular migration), asylum, readmission, refugees and border management. Montenegro believes that it is necessary to work on the strengthening of the initiative itself. In that context, and after 12 years of existence, it is necessary to conduct an adequate update of the structural and legal framework, in order to provide the widest possible participation, in accordance with the current regional architecture. To this end, Montenegro will propose a model which would provide suitable measures for the widest possible participation, which would offer possibilities for the further implementation of the MARRI programme objectives to be considered.
MARRI Regional Forum was organized on 10th of June. Senior representatives from MARRI Member States Albania, Bosnia and Herzegovina, Macedonia, Montenegro, and Serbia participated at the meeting in order to discuss and adopt the decisions proposed by the Committee. The Republic of Macedonia and Montenegro were represented by the Minister Mitko Chavkov and Minister Rasko Konjevic.
Minister Chavkov stressed that the countries from the region were under a tremendous pressure from the recent increase in migration flows from the Middle Eastern crisis. Minister stressed that Macedonia was putting all its available resources to deal with the problem, but we are all aware of the fact that it was an international problem which required international response. Minister Chavkov has handed over one year presidency to the Minister Konjevic.
Minister Konjevic reiterated the determination of Montenegro to dedicate its Presidency in Office period primarily to the strengthening of MARRI and its final consolidation to the regional institutional architecture. Minister Konjevic have also said that MARRI is one of the mechanisms that is making regional cooperation enriched and reaffirmed that Montenegro was ready to make every effort to effectuate the excellent political relations between the neighbouring countries, so that in this important field of activity the whole region would achieved the goal that brings it closer to the integration values and standards to which region strives.
Ambassador Tamara Mugosa from the Ministry of Foreign Affairs and European Integration of Montenegro was elected new MARRI Director for the period of three years. Expressing thanks to the senior officials for a consensual decision, the Minister stated that he beleived that engagement of the Ambasador Mugosa would further contribute to fullfillment of the priorites as well as promote the MARRI RC.
The Forum have approved recommendation of the Committee members to invite Kosovo* as equal participant to the MARRI RC and all forthcoming MARRI activities.
Minister of Interior of Kosovo* Skender Hyseni stressed the importance of regional cooperation and good neighbourhood relations, stating that Kosovo* was strongly committed to substantive cooperation with all Western Balkan countries, in order to address the phenomena of concern for the entire region. He has used this opportunity to thank all the countries that supported Kosovo* equal participation in MARRI and has pledged that the Ministry of Internal Affairs and relevant agencies will contribute fully to all planned activities.
Representatives from the Embassies of the United Kingdom, the United States of America, Delegation of the European Commission to Macedonia, IOM, ICMPD, Swiss Confederation and DCAF participated at the Forum expressing support to ongoing and planned activities.