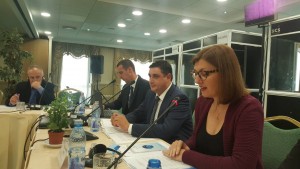 MARRI Regional Centre organized Third Annual Meeting- Study Visit to Bucharest, which took place on 27 September 2017. Cooperation Network composed by Commanders of international airports and Heads of the Land Border Departments from Southeast Europe, participated at this event. The event was organized within the Project “Support of the sustainable development of cooperation among border police in Southeast Europe BORDAIRPOL II” which is funded by the Swiss State Secretariat for Migration with the co-funding provided by MARRI.

The objective of the Study visit to the Border Police of Romania was to create possibility for the Cooperation Network to be acquainted with the EU legislation and practices. It was focused in particular on transfer of best practices aimed at reaching the EU standards in candidates and potential candidate countries.

The agenda also included provision of general information of Border Police of Romania and its cooperation with the Project beneficiaries (challenges and opportunities) as well as visit to the Henri Coandă- Otopeni International Airport. It also served to discuss further development of models on upgrading cooperation between MARRI Participants and other Project beneficiary countries.