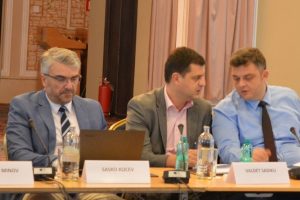 Gevgelija – MARRI Committee Members, Coordinators, Representatives and legal experts from MARRI Participants attended the third meeting of the MARRI Legal Framework Reform process, organized in accordance to the Plan for Finalization of MARRI’s Basic Documents adopted in April 2019 in Ohrid, and with support of the German government through GIZ North Macedonia.

During the meeting chaired by MARRI Presidency-in-Office of Kosovo*, the participants successfully concluded the Agenda, completing the revision of the MARRI’s existing legal framework, in addition to the newly proposed documents drafted by the Integrated Expert Mr. Christoph von Hardsdorf. The agreed next steps in the process include legal editing of the revised documents and final meeting of the Working Group in February 2020, before the documents are recommended for adoption to the MARRI Regional Forum.

* This designation is without prejudice to positions on status, and is in line with UNSCR 1244 and the ICJ Opinion on the Kosovo declaration of independence