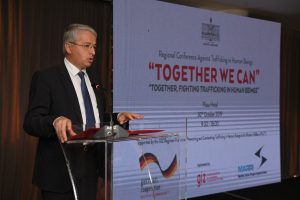 Tirana – The exchange of experiences about the evolving forms of the phenomenon of Trafficking in Human Beings in the Western Balkan region as well as new awareness raising methods and new identifications approaches were the main topics of the regional conference, organised by the Ministry of Interior of the Republic of Albania and the Office of the National Anti-Trafficking Co-ordinator (ONAC) with support of the German International Cooperation (GIZ), as a first event in the framework of the Regional Project on Preventing and combating trafficking in human beings in the Western Balkans (PaCT), implemented by GIZ in partnership with MARRI.

The conference that was opened by the Albanian Minister of Interior, Mr. Sandër Lleshaj, brought together relevant representatives and renown experts from Albania and the Balkan region. It was accompanied by an awareness raising exhibition of children’s drawings titled “How do I understand trafficking in human beings”.