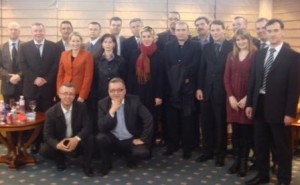 SKOPJE, Macedonia – The MARRI Regional Centre, together with the Macedonian Ministry of Foreign Affairs and the Ministry of Interior, within its capacity of MARRI Presidency-In-Office,  organised a Workshop titled “Establishment of network for cooperation among border police on international airport border crossing points in MARRI Member States,” held in Skopje on 27 March 2009.

The MARRI Member States are facing many challenges in their efforts to tackle increasingly complex and diverse phenomenon of irregular migration and its effects to the security, trafficking and smuggling of human beings, document security, the links to the security threats and the possible areas of international cooperation in particular among neighbouring countries along irregular migration “routes”, addressing these challenges primarily to the officials who are tasked to co-operate on operational level mostly.

Operational cooperation among the MARRI Member States can only be successful if they are able to share information of a technical and strategic nature swiftly and easily. A swift exchange of information on observed strategies and modus operandi (forged documents, modalities of border crossings, identified new routes, etc.) among national authorities, in particular among border police on international airport border crossing points, is a key factor to improve the effectiveness of counter-measures.

The overall objective of the Workshop was to improve regional migration management system to address issues of combating irregular migration on sustainable and permanent basis, thus contributing to the regional efforts to channel irregular flows to regular ones. Specific objectives of the MARRI Workshop were to establish more effective cross border co-operation among border police on international airport border crossing points in MARRI Member States, to increase efficiency in movement of persons and goods as well as to prevent/reduce crime and irregular migration.

MoI State Secretary Violeta Andonovska, as quoted by the Macedonian Information Agency (MIA), stressed that Republic of Macedonia has invested continual efforts in implementing reform processes, for the purpose of meeting European criteria in the field of justice and home affairs.She stressed the Government’s determination to enhance bilateral and regional cooperation in the fight against traditional organized crime through establishment of operational police cooperation, system of efficient and integrated border management, legislation harmonisation, as well as application of law through observance of European standards in the home affairs field.

EU experts contributed from EU perspective, drawing on the international expertise and experience. Representatives from the international organisations/agencies (OSCE,  FRONTEX, PCC, DCAF, ICMPD) were invited as well. They delivered presentations on their role in the field of cross border co-operation network between border police on international airport border crossing points.