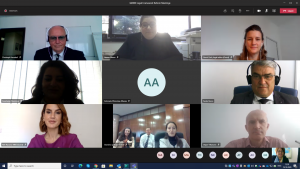 The Reform includes a partly concluded management reform and will lead to higher functionality of MARRI, optimized processes and increased efficiency as well as to a higher output of its Regional Centre.

The Legal Framework Reform process started in November 2018 under Bosnia and Herzegovina Presidency-in-Office, and continued under Kosovo* Presidency-in-Office. The reform process is fully supported by the international and regional stakeholders and funded by the German Federal Ministry for Economic Cooperation and Development (BMZ) through Deutsche Gesellschaft für Internationale Zusammenarbeit (GIZ).

All Participants will now study the produced, optimized draft documents and can still comment on them. At the next session of the MARRI COMMITTEE in December 2020, there is a great chance that pre-final texts can be agreed on for a recommended adoption by the Ministers of Interior/Security (MARRI FORUM) of all six MARRI Participants.